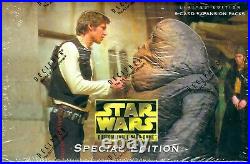 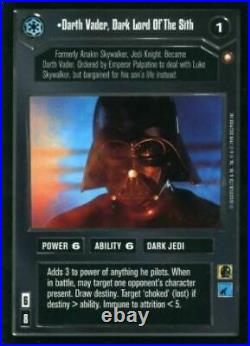 You are purchasing an amazing out-of print booster box from Star Wars: Customizable Card Game Limited Special Edition. The box is still in its original wrapper. This product has 30 packs per box and 9 cards per pack with the possibility of pulling a foil card.

Black bordered in the set. The box has pictures Han Solo appearing to negotiate with one of the most notorious Star Wars characters Jabba the Hut. This box is a must have for any Star Wars CCG collector or any Star Wars fan. Star Wars: Customizable Card Game.

(SW:CCG) is an out-of-print customizable card game based on the Star Wars fictional universe. It was created by Decipher, Inc. Which also produced the Star Trek Customizable Card Game and The Lord of the Rings Trading Card Game.

The game was produced from December 1995 until December 2001. Operation and oversight of the game was then taken over by a Decipher-created volunteer group called the Star Wars Customizable Card Game Players Committee.

To date, the Players Committee, or SWCCG PC, still runs the game and creates new cards known as "virtual cards" that are released online in PDF format, and can then be printed and played with. The game can also be played online; two popular options are the sites GEMP and Holotable. Over the years, Decipher added 11 full expansions to the original card base, as well as numerous smaller expansions, special purpose sets, and promotional releases.

The last set, Theed Palace, was offered in the fall of 2001. The game spanned all of the classic Star Wars trilogy (A New Hope , The Empire Strikes Back , and Return of the Jedi) as well as The Phantom Menace. Through 2020, SWCCG still has a very active playing community - both at live local and major events and with online gaming.

Each game requires one player to play the light side of the Force while the other plays the dark side. In friendly play, a player can specialize in one side or the other, but for tournaments, players need both Dark and Light decks. This two-sided aspect is rare in customizable card games (Star Wars: The Card Game and Netrunner being the other notable examples).

The action of the game occurs at various "Location" cards (both interstellar and planet-bound) familiar from the Star Wars Universe. Locations can be deployed as the game progresses; furthermore, most locations come in both Dark and Light-side flavors, and an on-the-table location can be "converted" (changed to the other side) at any time.

Most locations affect game play in some way; all also provide "Force icons, " which represent the amount of "Force" a player can activate per turn. Force is the game's resource, similar to "mana" from Magic: the Gathering ; however, it is executed quite differently and is the game's defining trait. Each unit of "Force" is simply a card from the top of a player's deck, placed off to one side in the Force Pile. " When used to deploy something, each unit of Force is placed on another pile, the "Used Pile, which then cycles back to the bottom of the deck. Unused Force remains in the Force Pile, and can be conserved for the next turn or drawn into hand.

The objective of the game is to force the opponent to discard all of their Life Force (consisting of Reserve Deck, Force pile and Used pile). This is accomplished via "Force Drains" (forcing the opponent to discard cards by controlling, unopposed, a location with their Force Icons on it), battling opposing characters, and resolving certain climactic situations (for instance, freezing a character in carbonite, winning a pod race, dueling a Jedi). The game system also features "Destiny draws, " which represents the elements of chance, uncertainty, luck, random chance and the Force. Each card has a destiny number, from 0 to 7, at the top-right corner (except locations, which count as destiny 0), and rather than using dice for generating random numbers, players "draw destiny" from the top of their deck, revealing the top card and using its destiny number as the result.

This is used for a variety of purposes, from determining weapon hits to mandatory losses your opponent incurred to resolving whether a character passes a Jedi Test. The drawn Destiny card goes to the Used Pile and is recycled into the deck. Through this system, a skillful player can legally count cards, remembering where the high-destiny cards are in the deck. Finally, the stronger (or rarer) cards generally had lower Destiny values (though there were exceptions); as a result, less-experienced (or economically challenged) players are more likely to find that The Force is with [them]. While Decipher oversaw the game, no card was ever banned from tournament play.

Instead, when a card or strategy was deemed abusive or too powerful, Decipher chose to release "magic bullets, " new cards which were specifically designed to counter the offending strategy. In some cases, Decipher also used errata, modifications to game text of a card that supersede the actual printed version. The use of errata also contributes to a steep learning curve, since players need to be aware of the current meta-game at all times. Finally, the game was known for its quirky humor and inside jokes: one card, depicting Luke's protracted hand-stand during The Empire Strikes Back , was printed with all text upside-down. Another described a character as being "twin brother of a famous mercenary" since the character's actor, Jeremy Bulloch, also portrayed Boba Fett.

This was the largest set since Premiere and the first to introduce new starter decks (which included many cards that could only be found in them). This set was seen as something of an overhaul of the game since it changed some game terms and attempted to make the entire play experience more streamlined through the release of a comprehensive rulebook and glossary. The most notable addition in this set was the introduction of the "objective" mechanic.

These cards allowed a player to start many more cards and provided a movie-based goal for a player's deck. Many players praised this addition, arguing that it made little-used strategies (like freezing people in carbonite) useful. This set introduced the widely popular "Darth Vader, Dark Lord of the Sith" persona. The Special Edition Limited set was the sixth full expansion set of the Star Wars Customizable Card Game (CCG), a card game based on the Star Wars universe. It consisted of 324 cards (162 Dark Side and 162 Light Side cards) and was introduced in November of 1998.

This set consisted of 120 rare, 80 uncommon, 80 common, and 44 fixed cards (only available in Starter decks). This was the only set produced for the Star Wars Customizable Card Game that spanned all three movies of the original trilogy; it was also the only set that included elements and images from the Special Edition releases. This set also was noted for introducing objectives to game play which altered game play to some degree (they were also the first double-sided cards in the game's history). Each pack included one rare card, three uncommon cards and five common cards. Starter decks were also produced for this set. They included 60 cards each, an updated rulebook, and a glossary. In these fixed cards, the B-wing fighter was introduced for the first time. This set is arguably one of the more significant sets in the Star Wars CCG, because of the sheer volume of new cards and elements it added to game play. Good Luck and Thank You for looking!

The item "1998 DECIPHER STAR WARS COLLECTIBLE SEALED LIMITED SPECIAL EDITION BOOSTER BOX" is in sale since Wednesday, July 14, 2021. This item is in the category "Toys & Hobbies\Collectible Card Games\CCG Sealed Boxes". The seller is "contescc" and is located in Haddonfield, New Jersey. This item can be shipped worldwide.