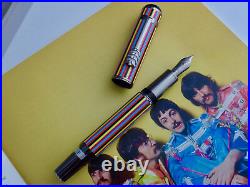 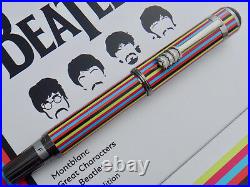 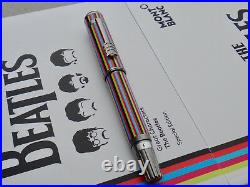 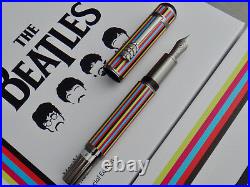 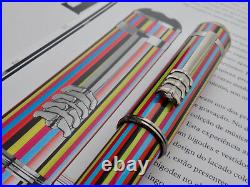 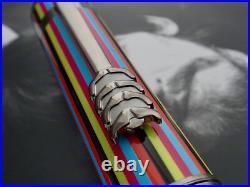 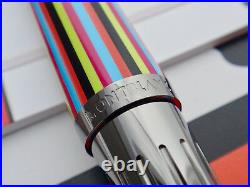 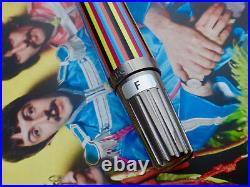 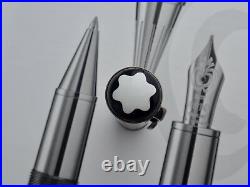 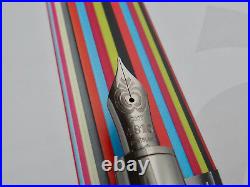 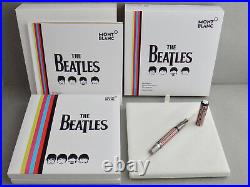 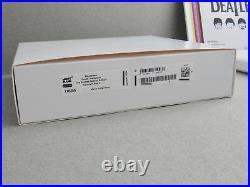 MONTBLANC The Beatles 2017 Great Characters Special Edition Fountain Pen. Fine (F) Au 14k 585 Nib. The Beatles (John Lennon, Paul Mc Cartney, George Harrison, Ringo Starr) were and are known as one of the most influential rock band worldwide. Formed in Liverpool in 1960 they debuted with their first single "Love me do" in October 1962 and immediately became an institution thanks to their explorations and mix of different music styles, combined with unconventional recording techniques and use of music videos. But Beatlemania was not only about music: it was almost a concrete social movement, part of the counterculture of the 1960s, where the two songwriters in particular were perceived as embodiments of the movement ideals.

After the immediate success in England the Beatlemania spread all over the world, leading the British Invasion of the United States pop market. The Montblanc Great Characters The Beatles Special Edition is dedicated to the most successful band of the 20th century. This colorful writing instrument is inspired by the psychedelic collection of pop music released in the album "Sgt Pepper's Lonely Hearts Club Band" in June 1967 (winner of four Granny Awards). Pictured in the cover of the album we find the "Fab Four" wearing the bright uniforms which inspired the lacquer decorating the cap and barrel. In this explosion of colours there is also a tribute to the first single of the band "Love me do".

When we come to think about the Beatles it is natural to figure them while crossing Abbey Road, where the recording studio of the band was based. Here the magic of inspiration - along with outstanding technical equipments - gave birth to over 200 compositions, from the early hit "She loves you"(1963) to "Let it be"(1969). "Abbey Road" was also the name of the iconic album released in 1969. Where we find the the four components crossing the (now famous) road in line. To recall the bright moments of composition and recording happening inside the studios the writing instrument silouhette is shaped like a "tube microphone" of the Beatles Era and the cone is "made" of buttons of a sound mixing console.

The ruthenium-coated clip shows four moustaches as a perfect emulation of the style of the four musicians. On the handcrafted ruthenium-coated Au 585 gold nib we find engraved the famous Apple logo, in honour of the music company Apple Corps ltd.

On the headquarter's rooftop the band performed. What was their last public show, in occasion of the "making of" their final videoclip "Let it be" in January 1969. The captop is crowned by Montblanc's emblem in black and white precious resin. The concerned pen comes is new.

Never inked & never used. It comes with all original boxes and papers (blank). We use only high quality materials such as double wall cardboard boxes, extra large buble wrap, polypropylene packaging tape, pvc pipe with high resistance. The attached photographs are to be considered part of the description. We are at your disposal for any further information. We usually reply messages within the same day, but please allow do bear in mind that our time zone differences might cause a slight delay. La funzione vocale è limitata a 200 caratteri. The item "MONTBLANC The Beatles 2017 Great Characters Special Edition Fountain Pen F Nib" is in sale since Thursday, December 14, 2017. This item is in the category "Collectibles\Pens & Writing Instruments\Pens\Fountain Pens\Montblanc". The seller is "erfobay" and is located in Paris. This item can be shipped worldwide.