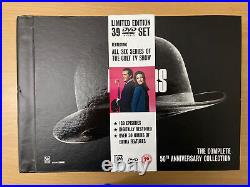 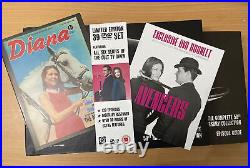 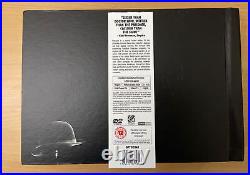 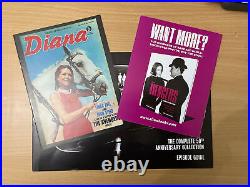 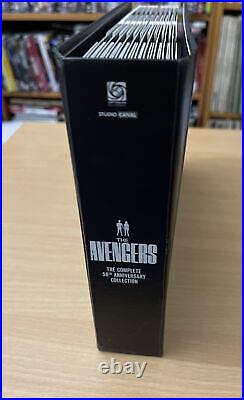 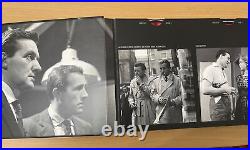 THE COMPLETE AVENGERS 50th ANNIVERSARY COLLECTION - 39 DVD SET RARE OOP. The Avengers remains an era defining TV series and retains an edge over many other small screen offerings as it celebrates its 50th Anniversary.

With its imaginative stories of secret agents in 1960s swinging Britain, The Avengers combines science fiction with fantasy, fashion and a unique sense of style, and can rightly claim its place as a prime example of the spy-fi genre. We may be in the 21st century, but The Avengers retains a fascination that is as fresh today as it was when it first took off on the small screen. Exciting, quirky, bizarre and quintessentially British, The Avengers pioneered many themes of modern television whilst introducing three of its best ever characters Steed (Patrick Macnee) Cathy Gale (Honor Blackman) and Emma Peel (Diana Rigg). With a unique take on Britishness, the series pioneered the use of all manner of tricks and gadgets and created Steed, the archetypal English gentleman in Savile Row suit, bowler hat and umbrella -alongside sexy, powerful women in high-heeled "kinky boots", influencing film and TV including James Bond and Dr Who.

The longest running espionage series produced for English-language television, The Avengers eventually reached audiences in 120 countries, a record that still stands to this day. Now, with the release of The Avengers: The Complete 50th Anniversary Collection you can enjoy every single episode of this timeless classic time and time again. This rare limited edition comes in an photo album style file format that holds the individual DVDs. It has all the extras. Including a miniature replica graphic novel Diana for Girls comic, exclusive DVD booklet, episode guide and hype-band the hype-band has been cut across the top, but it's main information and art is complete.

Some DVDS show minor surface marks, many are in mint condition. The album style DVD holder has some minor cosmetic mark, but overall it is in very good condition. Some extras include Released in a special limited edition 39 disc (including exclusive bonus disc) collector's package and fully digitally restored, The Avengers 50th Anniversary Complete Collection celebrates the original cult TV show by bringing together all six series, 139 episodes and over 30 hours of extra features of the classic British secret agent series.